I’m not ignoring you, I’m deaf

[checks out the price on the cashier’s screen]
[fishes in wallet for debit card]
[thinks where is that card, oh crap did I lose it, oh there it is]
[looks up and notices cashier and bagger looking at him like he’s being rude.]
“Is plastic okay?” asks the bagger, tersely.
“Ah, yes. Thanks.” 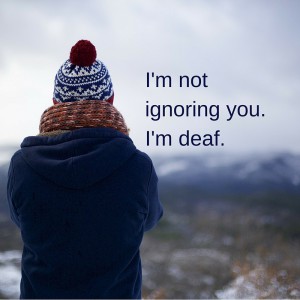 The world assumes I’m being rude. At least, that’s what it feels like. But, dear cashier/bagger/receptionist/waiter/clown, I am not ignoring you. I’m deaf.

I loathe being thought of as rude. Even if I know I’ve not done anything wrong and it’s just a wrong assumption on your part, I can’t stand the thought of being rude. And in addition to that, your looks of judgement and disdain generally sour my mood in an instant.

I’m sure I’m not the only one. I know there are plenty of people that honestly don’t care, but I’m sure there are also others like me that do care. Perhaps we shouldn’t care about how we’re perceived, but we do sometimes.

Why can’t you assume I am deaf and not ignoring you?

It’s not just about being perceived as rude, either. Sometimes it’s a more dangerous situation.

A number of years ago, my wife was getting her new classroom set up, and I was helping her out for the day. I was carrying boxes back and forth from the car to her classroom. It was a hot Saturday, and the school was locked up for the day. As a teacher, she was obviously allowed to be there, getting her room ready for the new school year.

Well, on this day I was trudging across the lawn with a heavy box, trying to keep it from falling apart. I sensed something, my Spidey senses tingling, and I looked behind me. 15 feet away, about 6 police officers were walking toward me, hands poised on guns, the lead officer red-faced and yelling at me.

They thought I was ignoring them. Their response was therefore angry, aggressive, and in my opinion an overreaction. I had a box in my hands, and I was walking slowly. What did they think I was going to do?

[Stomach sinks. Goosebumps spread. Thanks given for not wetting pants.]

The situation was defused when my wife came out and set them straight. Personally I was still a bit shook up by the encounter. A gun makes me uneasy when someone’s hand is resting on it, ready to draw.

Why can’t they assume that I am deaf and not ignoring them?

This post isn’t to make anyone feel bad about assuming that we’re ignoring you. I do get it. I hate to be ignored. My kids do it all the time when they’re mad at me for some consequence they have to accept for breaking rules. “I’m disengaging from this conversation,” says the 7-year-old, using our own words.

It’s a messed up situation sometimes. It seems there’s nothing I can personally do that will eliminate the problem. Sometimes I try to avoid it by being extra attentive, but that creates another problem: you think I’m watching you too closely, and it wigs you out.

I’m not a stalker, I promise. I’m just trying not to miss what you might say.

I have had a habit of saying, when I realize someone had been talking to me, “Sorry. I’m deaf.” I don’t want to say this anymore, because I’m not sorry I’m deaf. I shouldn’t feel sorry if I miss something, because it’s really not anyone’s fault.

Sometimes the situations are a little absurd. My first job was working as a stockperson in a produce store. I remember one day I was stocking the Romaine lettuce LIKE A BOSS. It went like this:

[Me, stocking Romaine, thinking bet this is the best anyone has ever stacked Romaine.]
[Elderly lady approaches me from behind and says, “Excuse me, can you help me?”]
[I go on with my Romaine-stacking self, pretty satisfied with my work. I admire the handiwork and make adjustments.]
[The lady repeats herself and gets increasingly angry, her voice rising each time until she is yelling, while my boss is across the store laughing his butt off]
[I move on to the Green Leaf lettuce, the lady storms off angrily.]

This post is a simple request, and one that I hope you actually take the time to share with all your friends. It’s not at all the most important message I have to share, but it’s still one that I want people to get.

If you don’t know us, stop assuming that we’re ignoring you.
Instead, if someone doesn’t respond to you, please think: Perhaps the person doesn’t hear me.
Perhaps the person isn’t deaf, but distracted, and you only need to say it again.
Perhaps the person IS deaf, but doesn’t know you said anything. Get our attention and try again.
If the person does turn out to be deaf, know that there are various methods, and what works for each person is different. Here’s a post I wrote about that: I can’t always lip-read you, and please stop shouting.

You know what? If it turns out that the person really was ignoring you, then by all means, give him the evil eye.