AG Bell has got it all wrong, but we can win hearts and minds anyway

Sadly, it wasn’t an April Fool’s joke that AG Bell (as we tend to call the Alexander Graham Bell Association for the Deaf and Hard of Hearing) decided to diminish the achievements of Nyle DiMarco by essentially saying they needed to “dispel the myths about deafness.”

In reading their article, I felt sick. I felt physically ill, and I was angry. If someone at AG Bell met me in person, I’d probably seem like someone they’d consider a success because I can speak. I can interact with hearing people, even though it’s difficult because lip-reading is such a challenge. I even had a cochlear implant, which should make them happy, except that it has sat covered in dust in a drawer for a decade now, broken and useless. And like I’ve said in other posts, I’m not inherently opposed to CIs. I’m not opposed to hearing aids. I’m not opposed to speech. I’m not even opposed to SEE, Cued Speech, or any of that, although I don’t really understand why anyone would choose them over ASL since I find ASL far more efficient, meaningful, soulful, and connected to the root of who we are as deaf people. We live and breathe this language, even when we love other languages, as I do. I am a lover of language. I savor English, I adore other languages, and I revere ASL not because I think it’s any more beautiful than any other language but because it’s a part of me. It’s a part of the people I care about.

So my stomach clenched in reading AG Bell’s post.

I am not that interested in trying to change the minds of the people in charge of AG Bell. I don’t even think they are bad people, at all, though I completely disagree with their outlook and I think they do real harm toward our cause. I’m not that interested in trying to change their minds because I don’t think there’s much chance of that happening. They don’t represent people like us, who cherish sign language. They may not even understand us. They might not get that so many of us are in favor of a bilingual approach, that we believe ASL is beneficial in teaching English as well. Trying to change their minds is, to me, like trying to turn a Republican into a Democrat or vice versa. It’s just not likely. 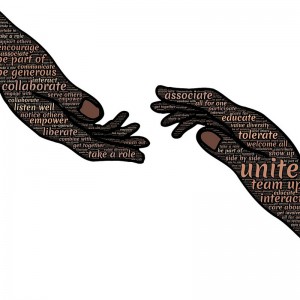 Image by John Hain via Pixabay

Yet we can be more powerful. We can win this fight. I do believe this. I believe we can win it the way that Martin Luther King, Jr. won, the way that Gandhi won, the way that other spiritual leaders of the past won. With a peaceful movement borne out of love and unity and not hate, not even against AG Bell. Hating AG Bell is a waste of our energy and only poisons us. It changes no one’s mind.

Anger, on the other hand, has a purpose when wielded calmly. Anger does not need to be a lashing out, but a quiet fire that sparks our passion. Passion for what we believe in doesn’t need anything more than a spark. Love for our community and our languages will drive us further. We need to be united.

I’m not an academic. I’m not going to fill this post with facts, many of which we’ve already seen. There are fantastic posts going around right now about the facts regarding language acquisition, written by far better experts than me, such as this short post by Dr. Peter C. Hauser in which he cites research that supports what we know. Although I am not an academic, I am one of you, and I have my thoughts and my dreams and my hopeful ideas, so I wracked my brain to see what I have to suggest as just two of many strategies that I hope we will see.

Truly connecting to hearing people before it’s even necessary, when the stakes aren’t as high

I feel we are reaching out to hearing people too late. We are connecting with them far more often after they’ve already discovered years earlier that their children were deaf. By that time, doctors with a medical-oriented approach pushed “solutions” like the Cochlear implant. Educators focused on speech therapy and training on learning to hear with their CIs and hearing aids, often to the detriment of the children’s education. Other subjects fell by the wayside or were minimized, but the kids were already getting support from those that are not what we normally consider our allies. Then one day, we come across these families, and we try to make our case and we’re met with doubt and resistance. In the backs of the minds of parents, they are hearing the voices of their children’s doctors and teachers. They are listening to this doubt.

We get there too late. Not always, but often.

So what I want to see happen is that I want to see more of us making an effort to reach out to hearing people every day that essentially aren’t that much a part of our lives. Take time to talk to the mail carrier. Use paper and pen if you have to, or find a way to teach one ASL phrase now and then. Meet your neighbors and do the same. Tell strangers about Deaf Culture, about ASL, about us. Do it all with love. Reach them now, not later. You don’t know what lies ahead in the lives of all these hearing people that don’t yet have a immediate reason to connect to us. The mail carrier may have a new son next year, and the son is discovered to be deaf. Then he remembers you, and he remembers how much he laughed over that joke you taught him in ASL. The neighbors discover their daughter’s new baby is deaf, and she remembers your kindness and how your intelligence and can-do attitude radiated through everything you signed.

And the ASL students! Thousands upon thousands who take ASL one and then fade away into the hearing world after not being able to find anyone willing to take the time to sit with them, to connect, to have a conversation even though it’s slower than you might like. Some of those ASL students may very well have children that are deaf one day. We just don’t know.

Even if all of these hearing people aren’t the ones who have deaf children, we would be making allies every single day in so many ways, that we will be the richer for it. And so strong, so strong will the community be with them as our allies. AG Bell and those who would diminish us would not be as much of a threat to our community.

It’s not a waste of time to educate the hearing world about AG Bell and how they’ve got it all wrong. While I don’t personally feel we can change their minds, that doesn’t mean we need to ignore what they’ve said or done. So I would love to see a peaceful demonstration happen outside AG Bell’s office. I’d love to see a crowd of the deaf community and our allies coming together there, peaceably, and joining together with hands raised in sign language. With smiles, smiles that come easy with the appreciation of how we are all connected, rather than let anger dominate our expressions. I’d love to see that, though I am thousands of miles away.

I believe the media would find it as fascinating as they did back during Deaf President Now in 1988, and I believe that if we reached out to the media ahead of time, we would be able to really raise awareness in our country like we have from time to time. It wouldn’t be to change the minds of AG Bell’s staff and Board of Directors, but to reach the hearts and minds of those not yet boxed in by the medical approach to us.

Although I wouldn’t be able to be there in body, I’d be there in spirit. Like so many of us, I’d do what I could to call attention to what is happening and why it is happening. We are all in this together. Others may doubt what we can achieve, but we don’t need to be doubters as well. We can believe in the potential for what a community like ours can achieve when we work together to make it happen.

Isn’t that worth doing? 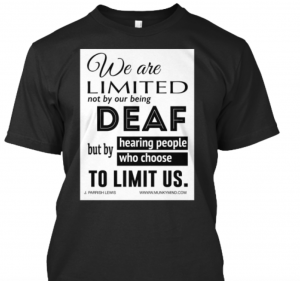 Click image to visit my Teespring campaign if you want this shirt!