The writer in the current

The writer sits on his green couch, keyboard poised on the soft pillow resting on his lap. The blank screen intimidates him and will not back down from his insistent stare. He wonders what will come forth, if anything will come forth, for doubts have multiplied of late. Self-doubts about his talent, fed by fearful thoughts and the burden of expectations that he places on himself, spread like wildfire through his veins. He can feel the doubt there. He feels it in the knot of stress in his shoulders. Yet the defiant scent of cinnamon wafts through the air, a byproduct of an afternoon’s spontaneous urge to bake cinnamon rolls. 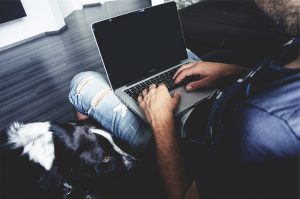 Image courtesy of Unsplash via Pixabay.com

He takes a deeper breath, the kind of breath that is cleansing, and realizes how absurd that thoughts manifest and change in such a short period of time. The doubt, the unwanted expectations, all of these wrapped up in attachments to ideas that never need to be held. The writer does not write for these reasons. He writes because he feels a story within that is aching to get out, to be born, to fall upon the pages or the screen and slowly adhere to some kind of permanent state of being. He writes because there is joy in such an act, if the heart and mind and the soul — oh, especially the soul — if all of these are open and receptive to such a joy.

The self-doubt is a wasted fiend, a villainous lurker. He will be banished or otherwise vanquished. It’s true that he returns, reborn from time to time, as life allows, but he will be watched. He is unwelcome, and the writer has the power to defy him at every turn. The expectations, too, will fall by the wayside. They are ridiculous hangers-on, desperate creatures looking to attach more importance to their being than is necessary. The writer knows this. He scoffs at such attachments. It’s only when he forgets to be mindful, which admittedly happens far more than he’d like, that they wield too much power over him. Yet, in spite of all the havoc they are able to wring out of every moment, they are pale shades of being. They are flimsy as the weakest paper; wind would destroy such gremlins in a moment’s notice.

Now, the writer casts aside these doubts and fears and wills himself into that sublime state of mind where everything becomes unified and thoughts align with a definite flow that pulls him along in its current. This requires an act: a giving in to spirit, a letting go that crystallizes positive intent. It’s a current in which the writer isn’t swept away helplessly, floundering in fear, but instead floating peacefully and safely along with the story. Nothing can harm the writer when he relents to this state. Mind and body and spirit feel perfectly aligned, and the story takes shape. Witness now, here he goes.

The keys of the keyboard feel lukewarm, smooth, and obedient. There is no resistance to the story, nor the spirit driving the story. They are depressed in a flurry of clicks, one after the other, an unheard song. He feels them, anyway.

He thinks, in that abstract way in which he has often thought, as if addressing his own muse: Thrust open the doors. Let it out. Let it go where it will go, and take me along with it.

One word at a time, each word a breath in text, until the sunlight has flooded the room.