Grief catches me in the back of the throat. That’s where the pain resides. I don’t know why this was, but that’s what I felt, trying to hold myself together while my grandfather lay in bed dying in his apartment in Seaside, California.

I arrived two days ago, after getting the word the day before that Grandfather’s time seemed likely to be coming to an end. He has days, perhaps, or maybe longer. This was uncertain, but I knew I had to come no matter how painful it might be for me to see him like this.

Grandfather has been almost a legend in the family my entire life. An adventurer, a traveler, a man who hiked the Pacific Crest Trail from Canada to Mexico and a man who bicycled from coast to coast. Charismatic, intelligent, romantic, enigmatic, grandfatherly. Strong. He lived on a boat for decades in Monterey Harbor, rowing a skiff to shore each day and wandering Monterey. He has always been interested in hearing the stories of others more than sharing his own stories.

When I was in my early 20s, Grandfather and I bicycled around California in one long 7-week loop that spanned 1,300 miles approximately. I will never forget this adventure we shared. When you spend that much time traveling with someone in such a fashion, you get to know that person in a richer way. I treasured every day spent on the road with him, even when I got annoyed with some of his stubborn choices. Like any human being, Grandfather has his flaws and being on the road revealed these flaws. I actually learned, on that trip, that those we look up to as children have as much of a right as anyone to not be perfect. They are allowed to have a temper, to disagree, to be stubborn, just as we are.

I have stories enough to fill a book, even with just that trip. Perhaps one day I will write them all down.

We talked of many things, not just on that trip but during stops for coffee down near Monterey Harbor. Literature, Poetry, adventure, life, philosophy, politics. Grandfather was a reader, especially of non-fiction. He especially loved reading biographies, again finding the stories of others more fascinating than his own stories. When his vision failed, my first thought was how would he read biographies? His hearing was already going as well. 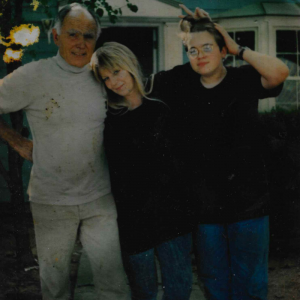 Grandfather, my mother (his former daughter-in law), and a 16-year-old me. He had just taught me how to parallel park.

I communicated with him by speaking and lip-reading, which had always been a challenge. It took all of my concentration to lip-read him, but I mostly managed as long as I knew the subject. When I was 17 and got a cochlear implant, one of the aspects of the CI that I did truly enjoy was the fact that with the CI, I understood every word Grandfather said. Our conversations were rich discussions, far easier than normal. When my CI processor broke, those conversations were one of the few things I missed. I didn’t expect him to learn ASL by then.

Yesterday, there was a part of me that wished that somehow he had learned ASL, so that we could use it in his final days, but the truth is that I doubt he would have been able to sign. He moves with difficulty, laying there in the bed, now mostly deaf and completely blind. He drifts in and out of consciousness. We all took our turns speaking into his ear. I reminded him of our trip together, because that’s where I felt we connected the most. Two days ago, he was able to respond that he remembered the trip. He remembered how, when we biked uphill non-stop up a mountain for hours and our water bottles had turned our water so hot that it was practically tea, a stranger at the mountaintop asked us if we wanted cold beers. We said God, yes, that. I was not and have never been much of a beer drinker, but that beer was the best beer I have ever had, and it was a cheap Trader Joe’s beer. When you bike up a mountain, that’s like a gift from god. He remembers that beer.

Yesterday he wasn’t as responsive, but I flashed back to a time when he shared the poem Ulysses, by Lord Alfred Tennyson, with me, and I decided he needed to hear it again, at least in part. If he was able to understand what we are saying to him, he deserves some poetry. So I read:

I was struck by how it seemed suitable for this time. He shared this poem with me, decades ago, and encouraged my interest in poetry. I had been inspired years before by the movie Dead Poet’s society, and Grandfather led me to discover poets that I had been unfamiliar with. He, like my father, encouraged my writing. I have always felt supported by both of them in this way.

So I read this poem for him, leaning close to his ear. I don’t know how much he followed it, but it felt like, well, this is something I can do. I can’t heal him. I can’t stop time. I can be there, and I can read him a poem.

“So much,” he quoted from William Carlos Williams, “depends upon a red wheelbarrow.”

He seems small now, and he is frail, but my father is right about the beauty that is there within him. He remarked, “do we all turn into babies at the end?”

I thought it would be hard to see him like this, and it was, but not in the way I expected. It was hard because I see his time coming to an end and I already grieve for him. I expected that it would be hard because he is not the strong man that once built fences all over Monterey, hiked mountains, rowed boats, and just plain lived an authentic life. As if he should still look exactly as he did. But in his current state, dependent on his loved ones to care for him, I still see his strength underlying it all.

Memories burst forth like a river released from a dam, memories that I had not thought about in years. Over the past few days, I revisit these memories like old friends. One in particular makes me smile, just a few years ago. On the day that Grandfather was to meet our daughter for the first time, newly adopted, we drove over to pick him up. He sat on the park bench where we often fetched him, but on this day, he was sitting next to an enormous teddy bear that was larger than our daughter. She was beyond thrilled, of course.

I realized that I was afraid that by visiting him in his final days, my image of him would be replaced by this smaller, weaker version of the self that he used to be. Now I see that it’s not that simple. I see all the years I have known him, and he is still all of those versions. Now he is also this man laying there in the bed, and although it is painful in many ways, this is still my Grandfather and a version of him that I want to remember like the rest. I have no desire to forget this version of him, because he is no less my Grandfather than any other time.

He has been well-cared for, mainly by his children. My father and my aunt have spent much time tending to his needs, a difficult task that I feel confident Grandfather is thankful for even if he doesn’t always say anything. The circle comes around again, the children care for the parents. We don’t want him to go, but at least he is surrounded by those who love him.

I think of him now, also, as the young boy that was dropped off at a lake to spend the summer camping. It set the tone for his life. Likely it was many years later before he read Ulysses, but I imagine he was already beginning to strive, to seek, to find, and not to yield to the pressures of the life ahead. We all make our choices, good ones and not, that shape the course of a life. He has lived on his own terms, sometimes stubbornly so, but I know with confidence that he was a man with love for his children, all his past wives, the family he started with, and the family he still has, all of us still treasuring him.

He may have been made weak by time and fate, but yes, definitely, he has been strong in will.

UPDATE: My aunt has created a GoFundMe page to raise funds for a closer resting place for Grandfather, in this area that he so loved. Every dollar raised will help toward making this happen. Please share, if you’re willing: