When I was the isolated deaf kid

When I was in High School, I spent the majority of my time alone, feeling invisible. At lunchtime most days, I’d get a couple packets of Nutty Bars and go to my little space in the Art classrooms, purposefully isolating myself rather than feel invisible in the cafeteria.

For the first two years, I at least usually had my older brother after school to hang out with, so my isolation was limited to school hours. We unfortunately went to separate schools, even though we were both deaf kids, because I relied on interpreters while he relied on his hearing aids. When we got home from school, tossing our backpacks on the floor and putting homework off until later, life was pretty good. Life was full of Star Trek: The Next Generation, faux-Army missions in the creek, or exploring the city on our bicycles.

By the time he graduated, I still had two years left of High School. When he left for college, and later moved across the country, I was not only losing the time I had with my brother, but also my best friend.

It was in Junior year that life went downhill. After school, if I didn’t have to go to work, I’d stop by the video store and rent a few movies, back when they were still VHS tapes, pick up a pizza and some soda, then go home and watch them. Otherwise I might watch 6 hours of television. Most days, I was home alone. On rare occasions, I went out by myself, usually driving my VW Bug to the Columbia Mall or the lake, still feeling invisible. I’d stop by my work on my off days, because I could chat with my co-workers there that actually seemed to like to chat with me. Something about that environment eliminated all the cliques that High School cultivated.

At school, it rarely ever felt that way. I felt like the kid that no one really wanted to take the time to talk with, the kid that just doesn’t fit in. I watched life, high school life, unfolding before me as if I were a spectator in the stands. The perpetual bystander, disengaged and disconnected. I felt like this the majority of my time, but there were a few people that honestly kept me sane. My interpreter was one of them, for we could always communicate easily with each other, telling our stories and sharing our thoughts. She was my friend, not just my interpreter, and I still feel that was so necessary. I still believe there’s value in interpreters in a school setting engaging with students as friends of a sort, rather than being completely limited to a 100% professional role, within reason of course.

I felt connections with just a few people over my high school years, people who were kind and charismatic, and each of them kept me from feeling like a complete ghost wandering the halls. Still, I was painfully shy, and because no one was fluent in sign language, I felt unable to turn those school friendships into the kind of deeper friendships that can turn High School into the so-called golden years that they were supposed to be. I doubted myself and doubted my worth. I felt like a third wheel, a person trying to latch onto the group in hopes of being accepted, but never really accepting myself at the same time.

This was me, a deaf student in a school full of hearing peers. My other friends had already transferred elsewhere or were being homeschooled for a change, or had such different schedules that I never saw them. I had a falling out with my best friend in 9th grade, who I had been close to since the third, a messed up situation that was entirely my own fault. As a result, I contributed to my own isolation.

There was a time that I visited the Maryland School for the Deaf, to catch a play there. I caught a glimpse of the environment, but I had spent so many years in an environment of mostly hearing peers that I didn’t feel I could sign the way those kids do. I was educated throughout childhood with the use of mostly Signing Exact English, and I wasn’t even good at that. I signed shyly, my hands low and to the side, facing my desk, where it wouldn’t be very noticeable. Signing, in an environment full of hearing students, made me feel like a target for ridicule.

Of course, I don’t feel that way now at all, since ASL became a part of my life in my college years, but in those days all I wanted was to feel like I could fit in.

The other day I was online and on a whim I decided to see if there had been a 20th reunion for my class a few years ago, which of course there was. What I didn’t expect to find was a slide show of students during those years.

I saw all the familiar faces, dozens of kids that either treated me as someone invisible or outright bullied me with their attitudes. I made people feel superior to me in those days, mostly the guys. I got talked down to a lot, because so many of them figured my being deaf meant I wasn’t intelligent either. Also in the slide show, girls who puzzled over how to communicate with me, that they always seemed to want to be somewhere else instead.

I was happy to see a few faces that were friendly, the few people that made me feel like I was actually there, and wished I could let them all know what that meant. I’m still in touch with one of them, and I did let him know. He had no idea what I was going through, back then, which doesn’t surprise me since I kept my feelings to myself.

Although looking back on those days now gives me a touch of sadness for my younger self, I know I got through it. I survived because of the kindness of the few, showing that even light connections can make a difference.

I feel confident that my entire High School experience would have been tremendously different if I had been surrounded by Deaf peers or at least hearing signers. This doesn’t reduce the value of those who I did know, for I will always be grateful for them. But imagine what it might have felt like to go to school and not feel like there’s a barrier of communication everywhere. To not feel lost when everyone is laughing and you don’t know why. To not need to ask. To not need an interpreter to tell me, but to be able to understand directly.

Perhaps you don’t need to imagine it, because you might have lived it.

I’m not opposed to mainstreaming kids who are deaf. Education-wise, I feel like I got a fantastic education on par with my hearing peers, and I’m grateful for that as well. Yet what I do think is necessary, absolutely necessary, is that when kids are mainstreamed they need to have at least a core group of deaf peers (and hearing peers who sign, of course). Education comes first, but it’s difficult to get through those years feeling isolated. I know it too well.

I think that this isolation was a large factor in my willingness to reconsider and allow myself to get the cochlear implant when I was 17. Just a few months before I graduated.

Think about that. A kid gets surgery largely because he doesn’t want to feel isolated. Wouldn’t it have been much easier to be in an environment full of signers?

In the slide show, something unexpected happened: I saw myself. In one photo out of hundreds, a 17-year-old me flashing the peace sign, sitting next to one of the guys that made a difference (including being an awesome concert buddy. Spin Doctors!) I look happy, but you can’t see in the photograph how lonely I really felt in those days. I don’t even know who the other kids I’m sitting with were, only the guy in the baseball cap, next to me. 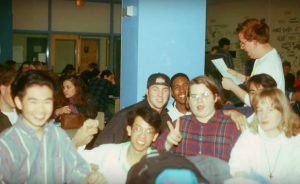 I’m the one with the peace and the plaid.

I wanted to share this little story because, well, I’m just hoping that at least one parent of a deaf child will give some thought to making sure this doesn’t happen when it doesn’t need to happen. Does that mean the kids should go to residential schools for the deaf? Not automatically, but sometimes yes. Rarely is there a perfect fit, a perfect situation. But isolation? Isolation should never be a part of the equation.

When in doubt, you can always ask the one who will know: the kids. Go ask your kids now.

As I’ve thought about this topic and I’ve flashed back to those days, I realize that there remain plenty of times that I am still that kid who doesn’t fit in and feels left out. I still get the same sense of being invisible at times. I still see groups of people, now adults, chatting and I wonder what they are laughing about. I go to my younger son’s soccer practice and notice how so many of the other parents are engaged in conversation while I sit a little removed from them, on my phone or reading a book.  And yes, I still struggle to make friends, even after all these years. Some things never change.

What has changed, however, is that I no longer feel that sense of loneliness that I used to, because I have a happy marriage to an incredible wife and I have three amazing kids. As if this wasn’t enough, I developed an appreciation for alone time, where I can just be myself without feeling a need to meet anyone else’s expectations. Life goes on, we get through the hard times, and peace is there if we look for it.

You can’t prevent all the hardships that young deaf kids today will face, but you might be able to prevent the isolation that I experienced. Your kids will thank you for it.