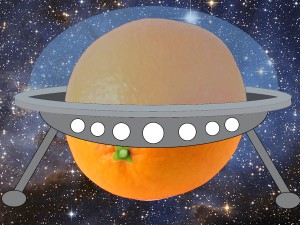 Went to Farmers’ market this morning, with the kiddos in tow. Got some leeks, Romaine, free range eggs -sadly, the white- and a trio of Greek delicacies including the necessary dolmas.

Out of nowhere, a large orange flew at my head, smacking me right in the middle of my forehead. Then it hovered in mid-air, spinning like some kind of micro-planet detached from its normal rotation.

The orange darted left, then right, then up, and then down. My eyes tired already, so I said, “What’s with you?”

The Greek vendors looked at me like I was crazy. But hey, I’m not an unidentified flying orange, I’m only seeing one.

The orange bounced through the air haphazardly over to a further table, with the three of us following after it. By this time, the kiddos had seen it as well and were entranced, jaws dropped and drool threatening to emerge. I think it was just that they wanted the orange, since the regular OJ guy had already shut his booth down.

The orange led us to the alien. His large head resembled a bulb of garlic. His eyes were as dark as what I’d imagine black holes would be, tinged with blues and greys along the circumference. Lovely, really.

He was reeling the orange in with some kind of laser-lined fishing pole. Got us, hook, laser line, and sinker.

“I knew it,” I said. “Farmers’ market has every sort. Even aliens.”

He nodded a sideways nod, which was a little odd, then spoke. I couldn’t make heads or tails or antennae out of whatever he said, being that I have no experience in lip-reading aliens.

Thankfully, the alien got it right away and began to sign in ASL.

“Oranges. 6 for a dollar. P-L-U-T-O-N-I-A-N. Delicious!” he signed in flawless ASL. Actually, his ASL skills were far better than mine, I realized with some resentment.

So I bought the half dozen Plutonian oranges, forking over the buck and a word of advice: “Next time, don’t aim for the head.”

I think I’m going to go make some juice.

I am so glad that I am not the only one who has seen this guy! Didn’t know he knew ASL though. I used pig latin which only made him shake uncontrollably and emit a sort of electric squeak like a cat toy or something.

It’s because he eats cat toys. Plenty of fiber. Plus the catnip is a draw, you know?