The other day I was asked by a father who cares very much about his daughter how he could help her deal with the struggles of communicating with hearing people during everyday activities. As he put it, he is concerned about her “transition into adulthood” without his being there to help.

As a father of three children, although all are hearing, I truly understand where this concern comes from. It is a valid worry for any parent. The fact that he cares enough to even think about this is a testament to his devotion toward his child, and I appreciate that. I’m sure you do, too.

I consider myself fortunate to be able to interact with hearing people in all walks of life, including those that do not sign, which is honestly most of them. The community assumes that I can hear, that I must be hard of hearing, but the truth is that I’m as deaf as anyone I know. I have my dusty and broken cochlear implant processor in a drawer somewhere, an old Nucleus MSP, now unused for a decade.

This is where you might think, as so many have thought, that the CI explains my ability to communicate with hearing people. It isn’t the case. I was always able to communicate with hearing people, to various degrees, though I would say that it was and is rarely 100% effective. My lip-reading skills have always been my biggest asset in communicating with non-signers, for which I am thankful, but I’d much rather be able to have sign language be a part of any conversation.

After the CI, which I got a few months shy of my 18th birthday, my ability to communicate with the hearing world DID benefit me. I would never deny that, though I know that it doesn’t always work as well as so many think it does. Someday I’ll write the deeper post about my complicated feelings regarding the CI. For now, let me just repeat what I have said in the past: don’t put all your eggs in one basket. Don’t rely on a technological device that can and will break to be the only bridge to communication.

I’ve used the imagery of a tightrope across a chasm as a way of trying to help others envision bridges of communication. It starts small, it’s a reaching out in sign language, a series of actions where a hand grabs another hand and so on, until the chasm is crossed. Do you know what I mean?

On one side you have someone that is deaf, who you love, like your daughter or your son, and on the other side is the hearing world. You’ve already built your own bridge to communication with your own loved one. The tightrope became a strong and sturdy bridge, because you built it, but what about the hearing world out there?

If a CI is the bridge you built, it’s one that can and will break. It can then be repaired, probably, but what will your loved one do in the meantime?

This is where you need other bridges, each of them having begun as a tightrope across that chasm. Your loved one, your child, your late-deafened parent, all of them, need more than just one way across. With this, and with your support along the way, they won’t need to feel isolated.

You are not going to eliminate the struggle, but that is okay. I struggle every day, and I am fine. I can communicate with the hearing world, but I run into snags in communication every day. I stumble over a word, or I get misunderstood. I try to lipread, but I fail to understand this man or that woman, or sometimes even my own children if they’re too lazy to sign in the moment. When I used my CI, I was able to have deep conversations with strangers, understanding every word spoken. That isn’t a typical experience for most implantees I have met. I also had plenty of awkward, confusing conversations when the person’s voice was simply not compatible with my CI. I could have a slow, basic conversation over the phone with my father, but then I’d barely understand my mother on the phone.

Nothing is as simple as you might think it is going to be.

So what can you do, right now, for your deaf kids? You work at teaching them how to build those different tightropes that will become bridges.

I want you to try to get their buy-in. I want you to do whatever you can to get your kids to understand the value in having these different ways to relate.

I want you to start all this with a foundation of communication in the home where you and your child have fantastic communication. I am biased toward sign language, so I will always promote sign language. In the USA, it’ll be ASL that I promote. Perhaps you are already doing this.

I want you to then encourage reading. I don’t care if it’s comic books, or the backs of cereal boxes. When I was a child, I read the cereal boxes and I had this truly awesome collection of a few thousand comics, mostly Archies and Disneys. later, that evolved into a Stephen King addiction and then by high school my tastes expanded. I want your kids to learn to love reading, so you’re going to have to find a way to make them actually want to read. It’s got to be fun, or it’s not going to work. You’re probably going to have to reward them, perhaps with comics.

I want you to encourage your deaf kids to have a journal, a diary, a little notebook in which they write down their thoughts, dreams, ideas, anything that comes to them. You will probably have to sell them on this idea, because it can seem like homework. Perhaps you do it together. In the past, I have had what I call a Conversation book with my own kids, where I’ll write something and ask questions, then leave the book for them to do the same.

Those are what I consider the necessary paths across the chasm. An effective language like ASL that they can cherish, a love of reading, and the confidence in the ability to write.

From that point on, you could encourage whatever you felt best as a parent. if you wanted speech therapy, then you could, though I’d recommend you keep a close eye on what subjects are being missed if your child’s going to speech therapy. I’m not going to lie, it’s a handy skill to be able to speak to a hearing person. It really is. But it’s not as vital, because if a deaf person has the ability to read and write well, then that would be enough.

Regardless of what avenues for communication you help your child build, they need to practice with more than just you. Have your daughter order her own food at the restaurant. Have your son ask the clerk in the store a question. Get them to join a sports team, a debate team, a book club, whatever it is that fits their interests. Make the world bigger. Make this world rich with both deaf peers and hearing peers, with deaf adults and hearing adults. Have your kids meet signers, non-signers, and learn from everyone. Have your teenagers get a job, teach them how to communicate with the boss.

They will be left out sometimes. It’s not fair and shouldn’t happen, but it does. Perhaps it always will, but hopefully it’ll happen less and less. Teach your kids to stand up for themselves, to ask questions, to say when they want to participate. Teach them to be prepared, to have a book to read if they don’t feel like being confrontational some days.

Teach them they deserve equality. That they are not less, will never be less, and don’t need to think of themselves as impaired. Teach them to be willing to walk out of the college class when the interpreter is truly not able to interpret, to go to whoever hired the interpreter, and politely but firmly insist on a qualified interpreter. We must not contain our thoughts, our words, when our thoughts and words are used as a force for good.

Fear doesn’t need to drive us. Let go of the idea that you can eliminate a struggle. Struggles can make us stronger, because a life without a struggle is a life where you won’t learn as much. Instead, learn to appreciate these challenges, and find ways to make it fun.

Isn’t that a much better way to live? 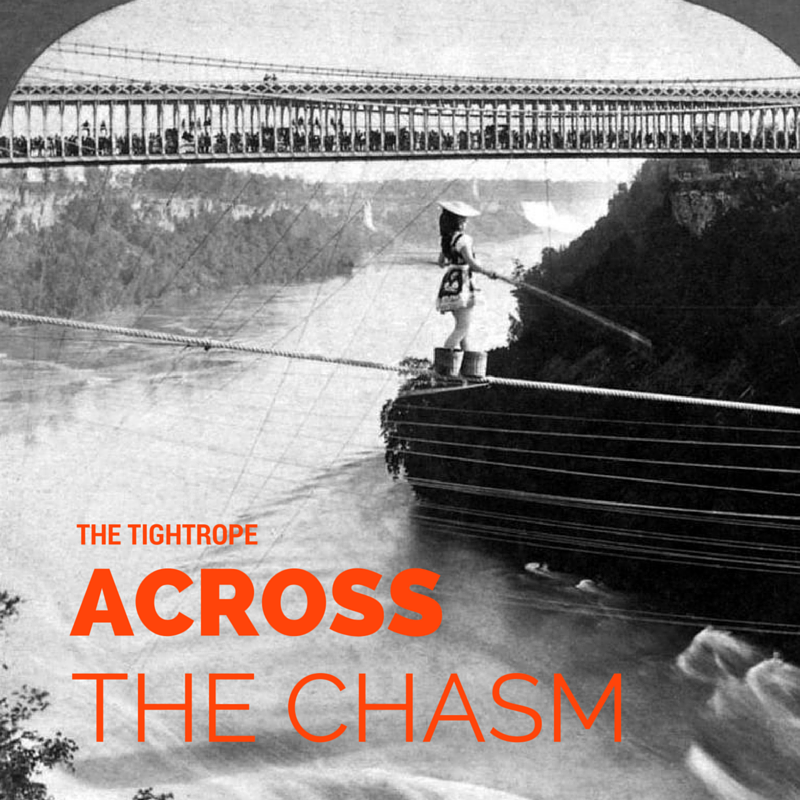 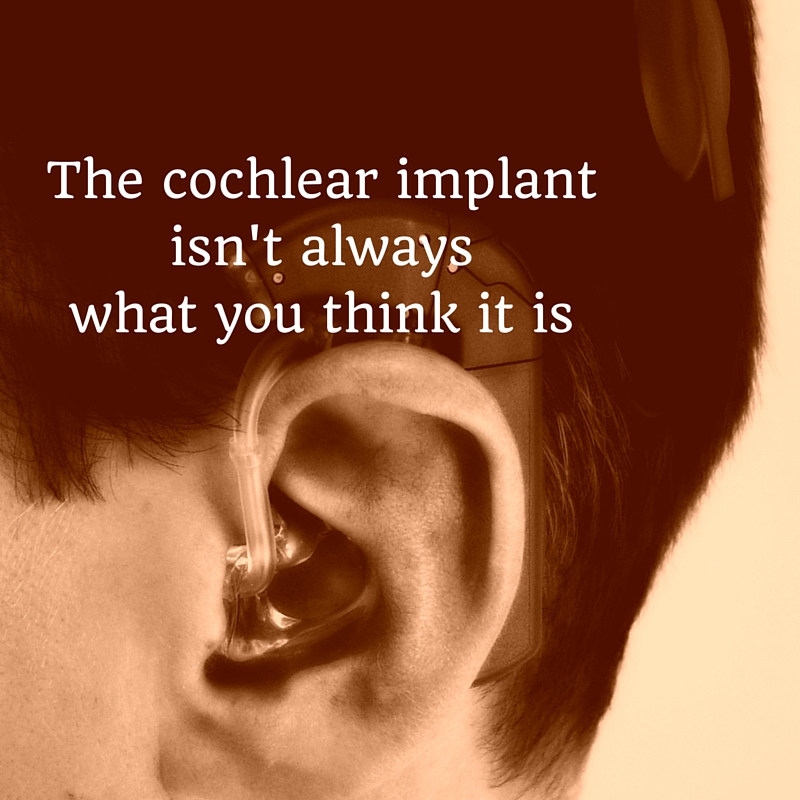 The Cochlear Implant isn’t always what you think it is 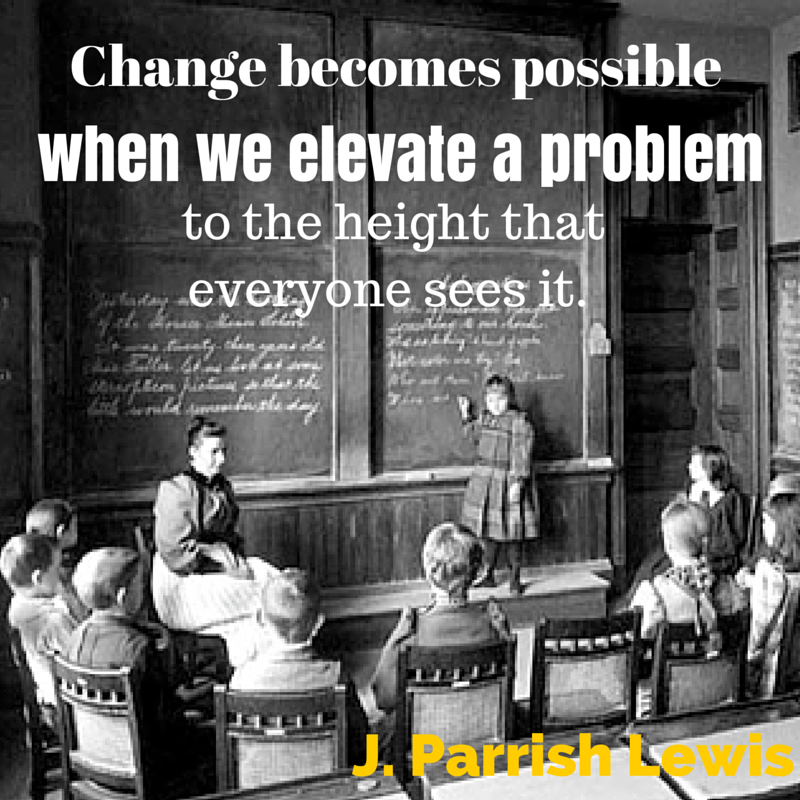