I should write this post on a typewriter. I’d even be satisfied with the word processor I had back in high school, an awe-inspiring machine which had this tiny screen that showed two or three lines of text that you could EDIT. I mean right there on that minuscule screen, you could edit it. Without White-Out.

Stumble through 23 years and here I am typing this in a Google document that saves my work every few seconds, which I’m doing on purpose since I lost one of my recent posts completely by typing it elsewhere.

I wish I was writing this on a typewriter because I feel too plugged in, like a lot of people are. I have come back to the thought now and then over the years about how our Internet consumption can be akin to junk food, only it’s junk food for our minds.

This is exacerbated by the almost viral spread of smart phones. They’ve infected our society, like a million robotic overlords packaged into tiny little devices and labeled with the adjective of smart. It’s insidious, and there’s nothing we can do about it except give in to the apps. I know this because I have my very own handy-dandy so-called smart phone that’s actually a few years old and beginning to gasp for breath in little megabytical ways, but I think it’s making me a little dumber, because the way I use it should be defined as a stealth lobotomy.

Before I go on, you need to know: I’m not judging you completely. Only a little. Mostly I’m judging myself, kind of like a King would judge his juggler to decide if the juggler was earning his keep. I’m judging my own actions because I believe in shining a lamp unto myself, as the Buddha’s often paraphrased/translated/whateveryouwannacallit.

I am too plugged in. A while ago I was in the sauna at the local gym, which is admittedly my favorite part of the facility. The dry kind of sauna, insanely and beautifully hot in that way that your body just heaps gratitude upon your mind for having the foresight to go there in the first place instead of sitting around on the couch eating corn chips. Thank you, thank you, thank you, like some muscular mantra. That kind of sauna. 5 years ago I sat in that sauna and people in there were almost meditatively enjoying the heat in our weird way, some of them reading a newspaper. But at this recent visit, everyone in the sauna clutched their smart phones like eagles seizing their prey in gruesome talons, eyes fixated on their screens.

Whether my sauna buddies were using their time well or not, it seemed like a sad downward spiral of humanity’s use of time. I found it even sadder when I did it myself, the next time I went. I didn’t think I would, but I blinked and then my phone was right there in my hand, with Facebook already loaded. I think that’s an indication of the Internet addiction I personally have.

I can’t escape the Internet. It’s too finely woven into my life. It’s integral to my work, both in my capacity as a project director for a non-profit organization that serves the Deaf and in my capacity as Head Penmonkey (to steal a phrase from Chuck Wendig, a writer I’ve recently come across that blows my mind) at Munky Mind. Without Internet, things will fall apart and centers will not hold and rough beasts will slouch. Yeats said so.

That preceding paragraph is an excuse and here’s why: I spend an average of 5 hours a day online either at home before work, during lunch hour, or after work, and about half of that is really just wasted time. It’s digital junk food. An hour is usually spent writing or promoting my work, and an hour is spent watching a TV show or two with my wife. Those are worthwhile. Even when the TV shows are just campy and terribly made, but somehow addictive. I could probably compact all the genuinely worthwhile time on social media outlets into 30 minutes if I did it all together. But that well-spent time is spread out. In between all the worthwhile comments, the joking around with friends, the genuine conversations, there’s far too much wasteful meandering and puttering around the Web.

Checking the election results every 5 minutes on a day there’s a primary or caucus. Scanning the Facebook feed for the twentieth time in a day to see if I missed anything that I hadn’t already seen. Opening the news sites a dozen or more times to see if there’s any articles worth reading, and reading the ones that aren’t actually worthwhile anyway. 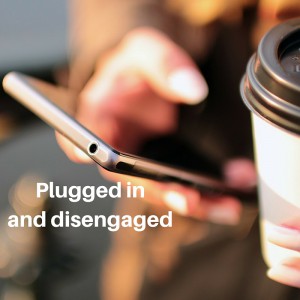 But far worse than that is the frequency in which I have my phone out, while the kids are with me. I’m spending time with them, and I get my phone out. Not because I need to, but because it has become a compulsion. I check the news, check my messages, check Facebook, and all the while my kids see me zombie-ing out with a smart phone, plugged in and disengaged with the real world. It’s not the example I want to set. I only have them for a few years before they all take flight from the nest. I am missing out.

“Yeah, your Gramps was always on his phone when we were kids,” they’ll tell their children. “Sometimes he forgot what we looked like…”

I don’t want that to be what my kids tell the grandkids. (You know, the grandkids they’ll have starting when they’re in the thirties, yes?)

Here’s what I plan to do: I am going to master the habit of asking myself before I open the laptop or get out my phone exactly what do I plan to do. If I have a specific plan in mind, like writing a post or watching a TV show or reading the news, or plotting world domination through the use of listservs and subliminal alt tags in photos, then I’ll open it and do whatever it is that I planned on doing. Once done, I’ll shut the laptop, put away the phone. I will be a mindful Digi-Zen Master about my choices, and my laptop and phone will no longer seem like permanent accessories.

It will be so easy.

Alright, it will be stupid hard. But, yeah, it’s got to be done. I should live my life a little more. I should draw silly cartoons, read some unforgettable books and some forgettable books, go for walks in the rain and all that. With the kids, and leave my phone at home, lying there on the counter plugged into the charger, sadly buzzing now and then.

What about you? Will you think about your choices? If you’d rather not, I won’t kick you. If you’re a happy diner with your Internet consumption, then that’s fantastic. But if you’re not, then what will you do?

3 replies on “Plugged in and disengaged”

I completely agree with this article on “Plugged in and Disengaged” I have this war every morning when I wake up whether to pick up my cell phone to go through emails, facebook, texts and more. In the morning I begin to think about my day and I have all these things and ideas of what I would like to accomplished for that day.

I’ll look at my cell phone and then begins a tug-of-war as to whether I’m going to get up and do what’s important to me first or am I going to pick up that phone and end up in a time capsule. If I pick up and look at what’s on my cell phone, it will feel like only a few minutes has passed. when in actuality I finally look at the clock and it’s 2 hours later and then start to kicked myself for not doing the things that I believe are quality activities.

I like to take time to focus on God before I start my morning to give me Focus strength and then I like to go and exercise, and make time with family, but if I pick up that phone those things can be lost in the passage of time and then I’m beginning to kick myself because there was so much I could have accomplished in those two hours. I want to improve my Asl which is important quality time as well. I have friends who are deaf and want to move from SEE TO ASL.

I have started setting alarms on my phone, so when it viberates or light flashes it signals that my time i’s up and to get off! Does it work? Some times. I’m improving in this area.

We’ll make it work. If we have the intention and the drive to follow through, we can do this!

Perhaps place a visible sticker somewhere on the phone that reminds me to stop and do some other thing first. I do not know what that would be.