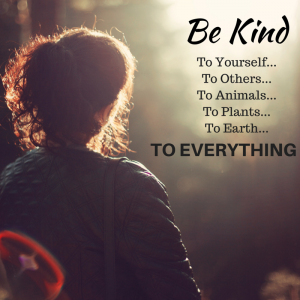 I have a reputation, somewhat deserved, for being a kind person. The truth is that, while I do try to be kind, I have never really lived up to my own expectations of how kind I want to be.

Yet I am human, and imperfect. I have a temper, but I am pretty skilled at keeping myself from a temper outburst. I was better before I became a parent.

My younger son often likes to say, “Tell the truth.” He says this with the word truth a little drawn out: Troo-ooth. At least, that’s how it appears to me when he says it. I can’t help but be charmed.

I promised myself that when I write on this blog, I’d do my best to be authentic. To tell the truth. To avoid putting on some false idea of who I am as a person. So that’s why, when I write about kindness today, I want to be honest. I think honesty helps us grow.

I am not kind to myself.

I have spent more than half of my lifetime not being kind to myself. I think most people can relate, but not everyone wants to admit it.

None of these desires are inherently a bad thing. The problem is I’m not kind to myself about these things. If I was talking to someone who said any of this, I’d be kind to that person. I’d be showing support. I’d be giving words of encouragement. I would not be making that person feel worse. I would not be emphasizing that person’s failings, but instead would highlight the successful things about a person.

The jury’s still out on that one.

When I was sitting in my Unitarian Universalist Fellowship service last night, we were all sitting in a circle of kindness. You could just sense how much we cared about the people we were with. There were easy smiles and easier laughs shared.

I’ll end this post with a link. This is a clip to a movie, a documentary called Human. It’s actually the first story, and it’s powerful. It’s an example of how kindness can touch the hearts of those we might have thought would not welcome such kindness.

Check it out HERE.

So, I dare you. I dare you to find ways to be kind that you’ve never done before. To Yourself. To Others. To Animals. To Plants. To Earth. To Everything.

I do understand the self-judgement. I do it often as well and am often unkind to myself. It’s hurtful.

Are you motivated to practice kindness toward yourself? It’s not easy to create the habit, but I think we need to.

[…] How kind are you? J. Parrish Lewis at Munky Mind challenges us all in “I dare you to be kinder than you’ve ever been.” […]

These adjectives only have value if we assign some kind of marker for reference. Who determines that marker? And if you say that you do, are you sure? Or have you been trained to believe that this other thing, the thing you supposedly are not, is the thing to be?

To be truly kind to yourself, recognize each of these moments is the truth, and truth holds no judgement. Truth just is.