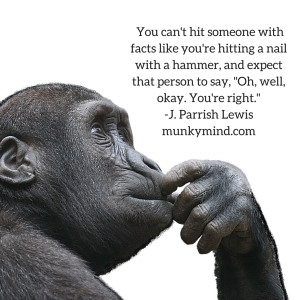 Like a lot of people, I’ve spent a lot of time trying to change the minds of people I know. When I was 12 years old I tried to convert everyone to vegetarianism. I also tried to convince Christians that we descended from apes.

I’ve tried to get people to see things my way about all kinds of topics. I think the majority of people do this, so it’s not a unique trait.

I can’t change your minds. Only you can change your mind. Only I can change mine. I can try to influence your thinking by sharing my own thoughts. I won’t pretend that I’m not trying to do that. Of course I am. I want to have my words be more than just entertainment. I want to influence your thoughts, even if it’s just to make you think about these issues. You might still end up disagreeing with me, and I can live with that.

I don’t have hate in my mind for those who disagree with me, just because they disagree. I try not to have hate at all, though hateful actions are a challenge. Hateful speech is a challenge. When I see people like Trump spreading messages that, to me, are words of hate, I get scared. I get scared because I worry they will be given the ability to turn their words into action, and hateful action at that.

In the last year, I have been bewildered by what I am seeing people on the “Far Right” say about a whole host of issues, including immigration, terrorism, religion, and more. Facts, and I mean facts that are well-researched and thoroughly backed up, are brought out to refute so many misconceptions. Take Trump’s story about thousands of Muslims in New Jersey cheering after the planes hit the Twin Towers on September 11. It never happened, and even though the facts have shown that, Trump didn’t change his mind.

He didn’t change his mind because someone else couldn’t do that. Only he can change his mind. We try to influence with our ideas, our opinions, and our facts. Perhaps our influence is sometimes enough to make a person want to change their minds, but it’s not us doing it. It’s them.

When we’re faced with people who are so entrenched in their beliefs about anything, it’s pointless to try and change their minds. You can’t hit someone with facts like you’re hitting a nail with a hammer, and expect that person to say, “Oh, well, okay. You’re right.”

I am writing this to myself. I am saying this to myself to try and find a little more peace, because I am tired of hoping for minds to change when I’ve expressed myself. I can’t change their minds, no matter how right I might think I am, backed by facts or backed by anecdotes that point to what seems to be the truth.

So I’m done trying to change the minds of people when it comes to things they’ve already formed an opinion on and already practiced that opinion until it has become nearly unshakable. If you’ve studied about the brain’s neuroplasticity, you know how complicated it can be to change how we think about anything. A thought, a belief, must be practiced for it to take hold and for the pathways to be strengthened. A person has to choose, in some way, to practice that thought or that belief. I can’t make a person choose to practice anything.

When I write anything that I hope will have influence on how people think about a specific subject, I will be focusing on those who have not yet developed a strong opinion about the topics. I will share what I have to share, and hopefully my words will be beneficial for people. I will, admittedly, hope that you see things my way, for I am biased toward my own opinion, but I won’t fault you for coming to different conclusions.

I just hope that, whatever conclusions you come to, regardless of the subject, that you are guided by love for all involved.

4 replies on “I can’t change your mind”

You are right on. The old saying, “You can lead a horse to water, but you can’t make it drink” is very fitting here. Part of the problem that I’ve found is that, especially when talking politics, is that people will argue about what is a credible source. I’ve shown people studies in professional Journals and they claim they’re biased. It can be extremely frustrating.

About 5/6 years ago I was of the opinion that cochlear implants were an amazing piece of technology and I still hold that opinion. Where my opinion has changed however, is that 5/6 years ago I would have questioned or even criticised a parent for not wanting their child implanted.

I’ve read a lot of comments on forums and social media about the matter and would like to think that I have now formed a more educated and sympathetic view on whether parents should go ahead. The same too goes for adults considering the procedure for it is my belief that it is not a simple matter. Even the matter of inserting an electrode array into the cochlear can result in destruction of the tiny hairs inside. This in turn, can result in destroying any residual hearing the recipient may have had.

It’s not just the medical aspect though. Consideration of the person’s feelings must also be considered and that’s not easy for a parent. How do they know how the child will feel when they are older? Do they live in an area where there is a Deaf community. Living on a small island, we do not have a very bid signing community.

One thing I have learned though, is to respect the feelings of the children I support, especially as they get older and are reaching the age where they are getting self conscious. If they decide they don’t want me to sign in the class room, I have adapt and teach them to adapt. Maybe, with gentle encouragement, they will change their minds. Who knows.

Thank you though for being open and speaking your mind. Even if you educate one person, that is one more person than before.

Thanks for commenting!
It’s a tough issue to talk about. It’s a tough one to even think about. We all have strong feelings and sometimes we’re conflicted with those feelings. I suspect this is going to be the case for decades to come, as far as the CI goes.
I like to hold on to the sense of “What is the intent of the parent? Does the parent care?” and if I feel that the intent is coming from a place of goodness, that the parent really does care about communication for their child, I can find more compassion for the parent. Even if the parent chooses a path that I wouldn’t agree with. In the end, we never know for sure how it will all unfold. There are too many exceptions to every “rule” to say with certainty what will work and what will not.
Perhaps the sense of certainty is something to let go of.